Okay, after that Xmas distraction, BallinEurope is ready to write up some more stuff about good tidings and cheer*, namely, the start of the NBA season. With hours to go, BiE’s got just enough time to get in the part two of the Euro-centric big-league preview in this brief look at the teams in the Western Conference – plus Official Fearless Predictions™, guaranteed to be as accurate as they are popular.

*Los Angeles Lakers fans, over whom a huge cloud of doom hangs to start this season, excluded (sigh).

As in the Eastern Conference preview, BiE seeks to keep an eye on those players who contributed a stint in Continental ball this summer during the lockout period and even, to some, extent participants in Eurobasket 2011. BiE believes that the running start from real game-time situations plus the suddenly intensive NBA season will give the Euroballers an advantage in the short-term against more laggardly opponents not in “basketball shape.” And with the shortened regular season, a jump start will provide lasting effects.

Northwest Division
It’s another case of ecstasy in being proven wrong: Since at least, what, the beginning of the 2009-10 Euroleague season, BiE has brazenly (though not Fearlessly™) told anyone who’d listen that Ricky Rubio would never play ball for the Minnesota Timberwolves, we’re just a day away from that very occurrence. The Human Highlight Clip went to work a couple times in the preseason and could start all 66 games this year.

But could Ricky even lead what GM David “Noonien Singh” Kahn likes to think may be a “steady rise to the top”? Wellllllllllllllllllllll, BiE wouldn’t necessarily go that far, though this is a scintillating, exciting lineup suddenly, with Kevin Love, Michael Beasley, Derrick Williams and J.J. Barea aboard.

But wait! From Europe are ‘Wolves Nikola Pekovic and – o, yeah – Darko Milicic. Does any realize that Minnesota is 19-90 (.174) since acquiring Darko? These two things can’t be related, can they? This dude is as good a passer as Vlade Divac, after all…

…Oklahoma City Thunder. European basketball fans can’t help but to have noticed Serge Ibaka in the past half-year, with the naturalized Spaniard going from the NBA playoffs to Eurobasket to Liga Endesa/Euroleague play with Real Madrid. And he’s looked mostly real good throughout.

As essentially the sole new member on Team Spain for the European championship, Ibaka typically got 15-20 minutes per game for Los Rojos. A couple of key performances came against Lithuania (15 points on 7-of-9 shooting with quite a few dunks and putbacks, nine rebounds, two blocks) and France (10 points and seven rebounds in 24 minutes of play) in early rounds, but the real badass came to play in the championship game. While scoring just four points, Ibaka controlled the middle whenever on the floor and totaled five blocks in denying Les Bleus access to the paint.

Chasing this, Ibaka merely contributing single-digit scoring with a block or 1.5 per game in Spain and in the EL for weeks, until suddenly unleashed and blowing up just as the lockout ended for back-to-back games of five blocks and 12 points against Spirou Charleroi, then a monster 15-point, five-dunk, nine-rebound, six-block tour de force against CAI Zaragoza.

BiE can’t wait to see this guy in a starting role playing a lot of minutes – any question he’ll win the block title this season? And, o yeah, the rest of the Thunder’s pretty good, too. Real good. Championship-level good.

The Denver Nuggets have an interesting roster happening, including lockout Euroballers Danilo Gallinari (with Emporio Armani Milano), Rudy Fernandez (Real Madrid), Ty Lawson (Žalgiris Kaunas) and Timofey Mozgov (BC Khimki Moscow Region). Gallinari is certainly getting the thumbs up from top-level pundits, with ESPN’s fantasy basketball machine proclaiming him “[maybe] the best player on the Nuggets this season,” while touting his “game-high 23 points in a game-high 34 minutes in the Nuggets’ preseason finale victory Thursday night. Gallinari’s shot was off (6-for-17 FG), but he was able to get to the line (9-for-9 FT) and knock down a couple of treys while also producing six boards, three assists and two steals.”

Indeed, Gallinari’s shooting percentage has been in a steady decline in the NBA since entering the league, a trend that keeps him away from all-star (or at least near all-star) status. Who knows? Maybe the lack of distraction will help.

BiE believes Lawson will be worth watching. Established as point guard with a swell stat line of 11.7 points on 50.3% shooting plus 4.7 assists per game, Ty will serve as the poster boy for BiE’s “ready to play” ideology. Plus, maybe he’ll tweet something interesting…

Then there’s Fernandez. Probably the last NBAer out of Europe, this guy has been pining to get out of American ball for some time. As the lockout ended, Real Madrid talked about attempting to keep Rudy aboard … then he had troublesome visa problems … let’s just hope the new team means a new start for the Madridista.

Finally! Enes Kanter suits up for the Utah Jazz! And with Mehmet Okur now dealt, Kanter should be seeing lots of quality time behind Al Jefferson – after seeing some nice continued development on Kanter’s part during Eurobasket, BiE anticipates the Turk’s season highly; with more confidence and work on ball-handling skills, this guy is bound to leave up to his ample promise. (Doing it in Utah, do you think anyone will notice…?)

Who can tell what the Portland Trail Blazers will do? And how much Nicolas Batum (SLUC Nancy) will be a factor? BiE loved what he did in Euroleague after another up year in the NBA… 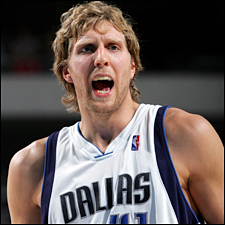 Southwest Division
First up here: The champs, Dirk Nowitzki and the Dallas Mavericks. It would be so easy to choose the Mavs to repeat – after all, this is the NBA, where dynasties and mini-dynasties happen. All the time – but wasn’t there something of a lightning-in-a-bottle effect last season? A perfect storm of events that included an imploding defending champion and an arrogant up-and-coming contender? Remarkably free of injury late for a squad bringing so many key veterans (Jason Kidd, Peja Stojakovic, etc.), the Mavericks weren’t exactly lucky per se but as with championship teams, the breaks went their way.

None of this is to detract from Nowitzki’s remarkable 2010-11 season, however. Nowitzki entered discussions of “top 20 NBA players of all-time” and “top European players ever” last year, and justifiably so as everyone discovered that he’d been doing this for years. And years and years in Dallas. Imagine the talk triggered by a repeat…

So can they repeat? Well, the best deal of the offseason may ultimately go down as the Lamar Odom-for-soda crackers trade – what a great shot in the arm for this roster, and one that will allow Dirk’s range to be further extended with Odom inside. Scary.

In the European interest is the current development of Rodrigue Beaubois, now ready to garner more minutes (last season marked his career high of 17.6 per game) with the departure of J.J. Barea. Much more than expected, say, three months ago, of the onus to repeat will be on Beaubois in 2011-12.

Despite his 10 years in the uniform, it will be strange to see Tony Parker donning San Antonio Spurs gear again. After a half-year’s worth of status as undisputed team leader and center of hype for Eurobasket’s silver-medaling Team France followed by Eurocuppers Asvel Villeurbanne, Parker becomes yet another piece in the puzzle with the perpetual playoff team. Again, though, BiE thinks the European warmup will do Parker and thus San Antonio much good in the early going. If he’s looking like an all-star point guard by late February, will management be so willing to trade him as has been so often rumored?

Then there’s Tiago Splitter, the former Euroleague force with Caja Laboral Baskonia. Splitter got in late to the European game this autumn, thereby playing just a handful of games with Valencia BC, though he looked impressive in his element of endless waves of the pick-and-roll. BiE found Splitter quite frustrating in NBA play in 2010-11, however, as he looked far too often to contentedly plant in the high post and set the occasional pick. Splitter could help form the nucleus for this team’s future with a modicum of constructive aggression.

What could have been Pau Gasol’s new team before the whole Chris Paul-to-the Lakers deal was voided, the Houston Rockets, still have some Europeans to look for. Luis Scola is still around, fighting for minutes with three other power forwards on the current roster, while BiE fears Goran “The Dragon” Dragic may starve for minutes behind Kyle Lowery.

The best re-signing of the offseason: It’s gotta be the Memphis Grizzlies reupping Marc Gasol, doesn’t it? And in terms of the preseason workout ethic, Marc and brother Pau may have made the best decision of the lot in merely training with FC Barcelona: With little chance of injury and mostly basketball-skills conditioning going on, aren’t the Gasols primed to play?

As for Jeremy Pargo, formerly memorably of Maccabi Tel Aviv, his two-year extension signed in December is a good sign he’ll stick around despite a crowd at point guard in Memphis.

In the short term, perhaps the best that can be said for the New Orleans Hornets in 2011-12 is that Chris Kaman is in a contract year. (What? He’s German, right?) And we’re cheering for Marco Belinelli, too. On those one or two occasions we watch the Hornets.

Pacific Division
All the hype going into the season is on the newly christened “Lob City,” a.k.a. Los Angeles, Clippers. And why not? What’s more exciting sounding that YouTube fodder feeder of Chris Paul to Blake Griffin. On the other hand, can BiE throw a little sobriety into the party? Look, after these two and Chauncey Billups, the roster gets pretty damn sparse. Do they really have no natural centers to back up DeAndre Jordan? After Griffin at power forward, they’re going to Ryan Gomes and Brian Cook? And don’t the Clippers have a history of bizarre knee ailments? BiE’d be holding his breath between gasp-worthy dunks if he were a Clips fan. Otherwise, enjoy the party.

For the Phoenix Suns, the battle at center: Robin Lopez vs. Marcin Gortat!

Message from Sacramento Kings: Come back, Omri Casspi! All is forgiven!

Golden State Warriors’ starting center Andris Biedrins is looking to bounce back from a couple injury-riddled seasons with the club. He’ll definitely be depended on from among a very slim frontcourt … And who’s this? Jeremy Tyler? And listed on the depth chart behind Kwame Brown … how utterly appropriate.

Then there are the Los Angeles Lakers. As a Lakers fan, BiE can tell you that two years removed from a title already seems like decades … and the season hasn’t even begun yet. What is this existential angst hanging over this team going into 2011-12? Of course, it’s all about The Trade That Was Never Made. It’s impossible to determine what exactly was the worst bit about that disaster – even if you keep it Laker-related. Maybe it was losing Odom for nothing to the team that smoked ‘em in the playoffs last year. Maybe it was having a vision of a clear future of excellence nastily snatched away in hours. Or maybe, as BiE fears, it was the effect on Pau Gasol’s psyche.

As the Lakers crumbled steadily in the playoffs before collapsing in Dallas, Gasol was the epicenter of rumor and implied blame; many stories revolved around a nasty breakup with a girlfriend. Whatever the cause, it didn’t take B.F. Skinner to see that Gasol was in shape but distracted, blessed with stamina but not willpower.

After the non-trade was announced, he reportedly felt “devastated,” probably, reasons the suddenly suicide-level pessimistic L.A. backers (you’d be too if your fourth-best player was Josh McRoberts), erasing any good an all-tournament team showing in Eurobasket and proper training with Barcelona. And, as a Laker fan, BiE will just stop before the keyboard gets too soggy with tears.