Fallout from Eurobasket 2011: Is Serbian basketball in trouble?

With a quite respectable history over the past 20 years – particularly in the FIBA EuroBasket tournament – Serbia has earned a reputation as one of The Continent’s great basketball powers. A little concern may be justified, then, at Team Serbia’s relatively disappointing eighth-place finish in this year’s European national-team tourney; indeed, at least one news source sees Serbia’s early bouncing as a symptom of greater illnesses affecting the team’s national program.

Setting the table for the “gloomy situation none of us are accustomed to when it comes to the sport in which the national teams have achieved top results with almost predictable regularity in the past,” Dragojevic says that “For a second time running captain Nenad Krstic and his teammates will miss out on an appearance at the Olympic Games and the team will now have to go through a qualification process for the 2013 EuroBasket [tournament].”

While the veracity of the statement cannot be debated, a couple of facts might quell the disappointment somewhat. Though Team Serbia managed to earn a spot in the ‘Games in 1996, 2000 and 2004, the pool gunning for Olympic basketball medals is quite an exclusive club: Just 12 sides will be invited to the 2012 London Games tournament … though the possibility of seven of these spots filled by European teams cannot be heartening for Serbia backers.

On the other hand, the list of European nations who also missed the mark for 2008 and 2012 includes Turkey (no. 6 in FIBA’s rankings after the 2010 World Championship and no. 3 in Europe), Italy (no. 7 and no. 4), and Slovenia (no. 17 and no. 9) – not exactly shabby company. Factor in France’s non-placement in 2000 and 2004 and it might be concluded that poor performance in one high-level international tournament or two does not a disaster make.

In fact, history indicates that Serbia fans might not exactly enjoy their team playing in the 2012 Games, as the squad fared worse on each of the three occasions after Barcelona, chasing its silver medal of ’96 with a 6th-place finish in 2000 and a lowly 11th in 2004.

As Dragojevic sees it, “it will be up to the Serbian Basketball Association to tackle the crisis” and “Until that happens, we can only hope for miracles and flashes of brilliance, such as the silver medal at the 2009 EuroBasket and a semifinal [finish] at the World Championships last year.” Sheesh, top-four finishes at two major international tourneys in a row is cause for panic? Plus, if you want to talk miracles, Serbia was on the wrong end of one in 2010; would the feeling be different in Serbia now had the team taken the silver in Turkey? More importantly, would the team have performed better in EuroBasket ’11? 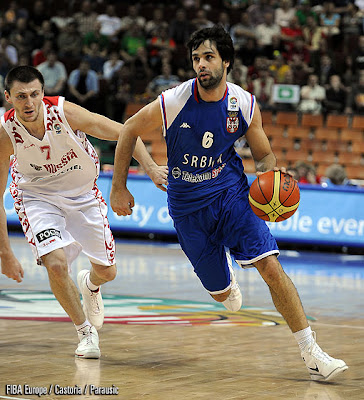 In “Basketball stifled,” Red Star Belgrade head coach Svetislav Pesic calls for “formation of a strong Serbian league” in which “winning the domestic league is the top priority for players.” Well, he’ll get no argument from BiE here: Serbia’s top-heavy association suffers from the same ennui that is bothersome (at least to outside observers) for a disturbingly high number of European leagues, i.e. Italy, Israel, Turkey, Lithuania, Greece, and Russia to a great extent. When one or two clubs dominate, the remaining “competitors” in the given domestic league either not-so-subtly (and in Lithuania, not subtly at all) become a breeding ground for the top teams or are simply out-budgeted.

Yet, take a look at Team Serbia’s roster for EuroBasket 2011: Though technically they brought no NBA players to the tournament – unless one includes Nenad Krstic, officially with CSKA Moscow for the 2011-12 season before August – this twelve was stocked with 10 Euroleague players: Krstic, Nemanja Bjelica, Marko Keselj, Milan Macvan, Boban Marjanovic, Kosta Perovic, Aleksander Rasic, Dusko Savanovic, Milos Teodosic and Milenko Tepic. If the national federation is going to look outside Serbian clubs for ballers, why wouldn’t a youngster take the money and run in the meanwhile? Perhaps it’s more a question of money rather than motivation … no, not perhaps. Definitely.

KK Hemofarm coach Zeljko Lukajic meanwhile sees something of a paradoxical problem in scheduling. While “Hemofarm take part in all of the three domestic competitions every season and play in Europe,” says Lukajic, “what is alarming is that some teams finish their seasons as early as March. That means that for three or four months they don’t have any tough competitive games, eventually don’t develop well enough and are simply not ready for a step forward in their careers.”

Unfortunately for them, the strange Serbian schedule is imbalanced toward competitors like Hemofarm. “We reached the final stages in three domestic competitions and in Europe last season. Together with training matches we played over 80 games,” explained Lukajic. “With the calendar and schedules that tight and with games played at that pace, you lose track of the work with young talent.”

In the near-final assessment, BiE would point out that perhaps Serbia is merely facing a bit of a nadir due to inexperience: After all, the oldest player on the team going into EuroBasket was Krstic at just-28 years old. How many national teams in Europe would enjoy having under-24s like Teodosic, Tepic, Keselj and Bjelica or their squads, reckoning they’d be around for six or seven more years (and two more FIBA World Championships)? Most, BiE thinks.

However, all of this is for naught, too, if Lukajic’s informal assessment of the state of his country’s playground ball is correct: “Some former basketball centres like Subotica, Nis, Cacak and Kraljevo are faltering and basketball is not played as it used to be. You can’t see as many kids playing basketball in the street.”

Not being familiar with local Serbian ball, BiE won’t comment on this specific; any Serbian readers care to enlighten us on the true of this statement? And how about that bigger question: Is Serbian basketball suffering from terminal illness or just a bit sluggish for the time being? We may have to wait for the 2012 squad to be assembled to find out…