Invisible to insane: The six types of basketball team owner

They say that no one has ever bought a ticket to a sports event in order to see an executive but with two weeks of American and European basketball club owners hogging sports page headlines, BallinEurope got to thinking about these moneyed celebrity types who run the teams we watch … and the often disturbing lure of the public eye that can bring out the worst in a showboating billionaire.

To define categorize ‘em all from Cuban to Romanov – and with Larry Ellison, would-be owner of the Golden State Warriors, firmly in mind – BiE presents the Six Types of Team Owner.

Though not necessarily the best guy to have as majority owner of your franchise – and definitely not the most amusing – The Invisible Man would surely be appreciated by quite a few fan bases right now. Perhaps buying the team strictly as a business purchase, by leaving things in the hands of competent “basketball people” with expertise, the Invisible Man can potentially put a consistently quality product on the court.

Fan satisfaction and profit may be had by The Invisible Man, perhaps even while turning a profit: Think of Larry Miller’s two-and-a-half decades of Utah Jazz ownership. Or even better yet, how about Peter M. Holt (who?) and his investors’ group that has been running the San Antonio Spurs since 1993?

The danger of having The Invisible Man take charge of your club, of course, is the great potential for metamorphosis into The Apathetic Man – examples abound of this particular sort of absentee CEO; BiE would call out a certain Charlotte Bobcats majority owner here, but His Airness is no doubt busy on the golf course.

For better or worse, most European franchise owners seem to fall in one of the above two categories, maybe simply because contracts signed with players, coaches and often personnel are so damn short. Recent trends tend to indicate, however, that owners here on The Continent are slowly realizing the glamorous celebrity potential in basketball team ownership upon doing something publicly outrageous. 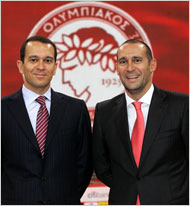 In contrast to The Invisible Man and The Apathetic Man is The Big Spender. On the surface of it, The Big Spender is one owner you want to see handling your favorite franchise. After all, consider the way the NBA’s outwardly most-extravagant owner, Mark Cuban, has attracted top talent based on the luxurious trappings and contracts offered by Dallas Mavericks Basketball, Inc.

The initial excitement of seeing the dollars and/or euros fly ‘round and the big-name free agents come into town does wear off, though, and an entire fan base is left to reconsider once again exactly when throwing money at the roster ever worked in sports history. And reality has a way of checking in, too.

Cuban, the archetype here, may be hemorrhaging money and facing lawsuits; meanwhile, his highly-paid, well-treated Mavericks made yet another egregious exit from the playoffs in a perpetuation of losing tiring enough to perhaps finally scare off its franchise player.

The principle of “money can’t buy you titles” (well, outside of high-level European women’s ball, that is) may yet hit the Biggest Spenders here on The Continent, the Angelopoulos brothers of Olympiacos.

Since brazenly declaring their desire to make Olympiacos “the best in the world outside of the NBA,” the Greek guys had collected a trio of Josh Childress, Linas Kleiza and Von Wafer going into 2009-10 for a combined sum worth more than the budgets of a great majority of clubs across Europe.

The result? A triple sweep in 2008-09 by arch-rivals Panathinaikos to deny the Reds any title. In 2009-10, Olympiacos played an excellent regular season in Euroleague play, only to see the nicely-paid Kleiza slowly disappear as the playoffs went on. Oh, and Wafer redefined “washout” for the club.

Olympiacos has earned a spot in the Greek league finals and with a win could possibly deem 2009-10 successful, having taken the Greek Cup, Greek championship and the best regular-season record in ESAKE. I mean, that’s the least these moneybags could have produced for at least $140 million, right?

Mostly relegated to U.S. sports in its more obvious form is The Petulant Lad. While any number of owners certainly clash with league officials, local authorities and the like (after all, these are seriously rich buggers who are far more accustomed to giving rather than taking orders), it takes a certain type to really stick it to a loyal fanbase.

In the ‘States, The Petulant Lad gets plenty of attention in the most dramatic way possible: He takes his ball and goes home, i.e. moves the entire franchise with nary a sentimental goodbye and typically a ludicrous attitude toward club history.

This month, Turkish basketball saw its first true 21st-century manifestation of The Petulant Lad in action when Tuncay Özilhan threatened to close up shop in Istanbul and simply shut down his Efes Pilsen club, only the most celebrated team in Turkey.

Why? As it turns out, a new law is in front of legislators that would introduce wide-ranging limitations in Turkey on tobacco and alcohol advertising. As a guy who became one of the richest men in his country by hawking Efes Pilsen beer, naturally, this would irk. But seriously, need Tuncay Özilhan shut down everything? Isn’t there any other product he might pimp for worldwide exposure in Euroleague play? What about Alternatif Bank? What about Coca Cola İçecek? Wouldn’t that be OK, Tuncay?

The, of course, there’s simply The Insane: Butt of jokes for everyone else, lamentable tragedy for his team’s fans. The Insane can evolve from nearly any of the aforementioned archetypes, but the level of emotional manipulation visited upon the loyal fans is several degrees more intense.

While Cuban’s obsessive-compulsive penchant for detailing the minutiae of poor refereeing may be a bit kooky and his love of the fine-inducing quote a touch masochistic, few Mavericks fans doubt his general competence. Dallas basketball devotees don’t necessarily live in fear of calling up ESPN.com (except during the playoffs, one supposes) to see some inexplicable maneuver that might just crush the team overnight.

BiE tells ya, right about now, fans of Zalgiris Kaunas wish a guy like Mark Cuban (or nearly any of the owners mentioned thus far, really) were calling Lithuania home after witnessing the shenanigans of Vladimir Romanov in 2009-10.

Far too long and complex to detail here – and BallinEurope readers certainly have read enough on the incredible situation going on in the LKL – the basics are these: Romanov fired/squeezed out/made live unlivable for three head coaches this season despite a Lithuanian championship series appearance and a Euroleague Top 16 bid; the last of these was canned after game three of the finals, leaving guard Marcus Brown to coach the team when the last assistant coach also walked out on Romanov.

Whether or not there’s a conspiracy afoot, Romanov actually has an elaborate masterplan in mind or he’s just a straight-up cuckoo with a too-fat wallet, the average lifespan of the Zalgiris fan must be getting years shaved away right about now. And that can’t be a good thing.

Finally, and ever-elusively, is The Genius. A rare combination of money, some basketball intelligence and luck, The Genius often receives the admiration of his fanbase, a rarity in any sport. Bias aside, BiE will hold up Jerry Buss as the example here.

Buss is also quite happy to see the guards run the asylum, and the fruits of former GM Jerry West’s labor is still earning the Lakers gold.

In fact, West’s departure from Los Angeles makes for a nice encapsulation of The Genius’ power. Arguably one of the top GMs at the time (not to mention Mr. Clutch, The Logo, etc.), West leaving L.A. was met with vitriol. With the Lakers soon continuing in their winning ways, however, most soon forgot. As it turns out, West left the club to which he’d dedicated his career because of – get this – money.

In a few weeks, Buss may be presenting the same hardline to Jackson, universally recognized outside of Boston and San Antonio as the greatest coach of our time. Is Buss really a genius? We’ll see if he and the club can survive the hit of a Jackson departure…

As for the Continental perspective, BallinEurope is about to make a lot of New Jerseyans quite happy, indeed: Based on his experience with CSKA Moscow basketball and soccer (incidentally, the former was in the Euroleague Final Four, while the latter advanced to the last eight of the Champions League playoffs), Mikhail Prokhorov certainly looks to become the newest Genius among NBA owners.

Not wanting to get anyone too too excited here, but the truth is the funny Russian appears to have all the tools in place to bring greatness to New Jersey basketball. He’s a self-made billionaire a la Cuban, albeit beginning in a way lower-tech field; his love of the game and former play gives him enough knowledge to appreciate a few subtler points of strategy; and the “basketball people” he’ll probably be bringing created a monster in Moscow in the 2000s.

You got a good one here, Nets nuts. Enjoy the ride; it should be interesting.

And don’t worry about that whole renaming thing. BiE is sure Prokhorov was just kidding. Maybe.

May 24, 2010ballineurope
Powered by Sidelines
Share on FacebookShare on Twitter
This post was published on May 24, 2010
Stop the press: New Ricky Rubio YouTube clipsBig third quarter boosts L.Rytas to LKL championship win over Zalgiris Kaunas, 80-71